Can you P-L-E-A-S-E tell me when it is appropriate to use them term "relation" versus "relationship?" ...I typically use the term "relation" with variables in stat/data analysis. I'd like to be right, but I'm more interested in being accurate. 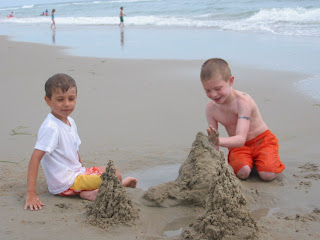 A couple of my relations, 6 years ago

A very good question, especially because certain people—behaviorists, mostly—have made up rules that defy good usage and elegance. First, the mistake they often make is to say that “relations” should be used for the connection between two variables. In behaviorism, of course, this is most commonly used in “functional relation.” These people can’t stand “functional relationship,” even though this is actually a better form and doesn’t clang to people who know their English. These behaviorists think “relationship” belongs to the affiliations between people (e.g., “the child had a good relationship with his brother”).

In fact, a relationship has two meanings: personal affiliations (friendships, romantic link, etc.), the way two things are connected (including variables—e.g., “the relationship between the predictor and the outcome” or “the correlational relationship between Variable X and Variable Y” or “the functional relationship between the independent and the dependent variables”). Relation also describes the link between people (e.g., relations between teachers and students should be nurtured). You can see that this could also be “relationships between teachers and students….” So when discussing links between people, groups, or countries and the way they behave towards each other (I’m quoting the BBC here), the two terms are interchangeable. But in certain contexts “relations” is always used: diplomatic relations, race relations. Relations can also be used interchangeably with relatives, although that’s not as common in the U.S. as in British-English countries.

So, I’m afraid you’re not right about variables taking “relation,” although, as I said, many behaviorists would agree with you—and probably statisticians too. But if I had to pick two groups of people who like to talk fancy and who consider themselves precise but who slaughter the language, it would be behaviorists and statisticians. Eighty percent of the time “relationship” will serve you well. Which one you choose depends on whose wincing you care most about!
Posted by Robin McWilliam at 7:07 AM