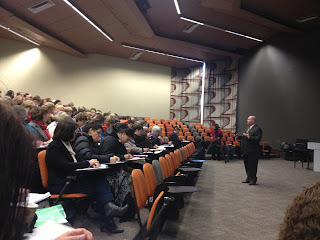 Strange things were heard at the University of Canterbury today, such as

Apparently, toy bags are still being used in some parts of the world;
Some people are still working directly with children on home visits; and
Some children are being pulled out of classrooms for intervention.

I presented on the Routines-Based Early Intervention Model to about 200 people from around the country. These people were engaged and most everyone identified three things they wanted to start working on.

Dinner tonight at Dux Dine with practice advisors, and PJ was along too.
Posted by Robin McWilliam at 3:14 AM

Eighteen early interventionists in Aotearoa are now ready to go  practice their newly found RBI skills. Today, they practiced more interviewing--this time the interviewers had to take their own notes. One third of the group gave feedback based on the RBI Implementation Checklist.

In the afternoon, we talked about the next steps for these participants. They will return to their home programs and, in addition to practicing their RBI skills, they will tell their colleagues about the RBI. Those colleagues range, as everywhere, from those who have been practicing a long time and see no reason to change to those who are brand new to early intervention. Right now, all the participants have to do is hone their RBI skills. As they see the benefits to families, including children, they will start talking about these benefits to their colleagues. It's probably better to talk about specific successes than to try to sell an idea that hasn't been implemented.

We ended the day with one of the participants, Annie, leading us in a song she wrote the lyrics to--to the tune of the Chattanooga Choo Choo, in honor or my workplace. It was very clever and a lot of fun. Kiwi professionals are used to singing, so it was a success. They also sang a traditional song to conclude the workshop.

Great things are on the horizon in New Zealand, with this band of energetic, enthusiastic early interventionists ready to go out and conduct RBIs.

Posted by Robin McWilliam at 11:47 PM 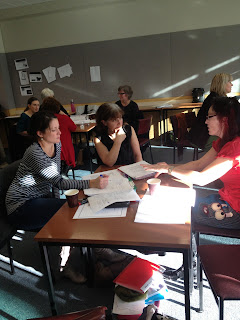 Today, the participants learned to draw ecomaps, they practiced interviewing, and they learned to write participation-based goals. Actually, they were amazingly well prepared, having read many of my materials and tried the practices. Much of this preparation was thanks to Julia Woodward, whom you can see in the picture at left; she's in the back, with glasses. As one of the four practice advisors in New Zealand for early intervention, she has spearheaded the introduction of the RBEI model, starting with the RBI, to Kiwis. The other practice advisors absorbed the material, passed it on to their people, and have been strong advocates for learning about this model.

I have learned quite a bit from the professionals in this workshop, especially about Maori customs, as well as other Kiwi practices. I found myself adapting a well-known saying regarding the U.S. and Britain, when I said that New Zealand and the U.S. are two countries divided by a common language. For a scatological example, bowel movements are bowel motions here. People can be upskilled (i.e., gaining new skills). 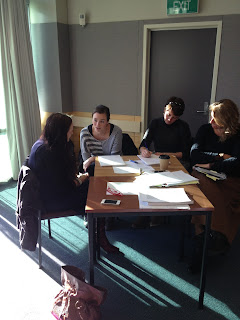 I am optimistic about these future RBI interviewers and trainers. Most of them have good interviewing instincts and have been fast learners about the structure of the RBI. It has been very helpful having Jo, Naomi, and Suzanne, along with Julia, to help train. These coaches, whom I trained last year, are perceptive and of course have the credibility of having used the RBI in New Zealand.

Posted by Robin McWilliam at 1:00 PM

An exciting chapter for New Zealand's early intervention began on the campus of the University of Canterbury this morning. Fifteen people from around the country gathered to receive training on the Routines-Based Interview, with a view to their becoming trainers in this process.

This 3-day training, what some people call RBI Training Lite, will, we hope, result in a new cadre of trainers. From the first training a year or so ago, four professionals have been approved as trainers (3 are present at my training). These four coaches will help me train the new cadre.

Today, I demonstrated the interview with a family from Christchurch, who were great for the purposes of our training. Their child was born with a number of congenital abnormalities but the real issues now that the child is a preschooler are the child's challenging behaviors. We all fell in love with the parents and were very grateful that they let us use them for this training. Also, the child's kindergarten teacher came and told us about the child's routines there.

The trainees were perceptive about the value of the RBI. They commented on the depth of the assessment and the extent to which family-level issues emerged. They were well prepared, having read materials about the RBI and seen information at www.siskinresearch.org. In the afternoon, we discussed the secrets of good interviewing and the structure of the interview. Tomorrow, they practice.
Posted by Robin McWilliam at 10:41 PM

I am working with New Zealand on implementing the Routines-Based Early Intervention model. More about that in subsequent posts.

My wife, PJ, is accompanying me on this trip. Today, Sunday, June 23, 2013, we caught up on sleep at our hotel, the Palisades Hotel. After what I consider a typical English breakfast, which might also be a typical Kiwi breakfast (eggs, tomatoes, mushrooms, undercooked thick bacon, toast, potatoes) for me, we headed out to explore our environs. We soon ended up in 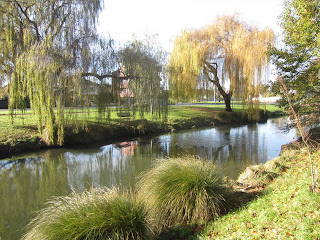 North Hagley Park (pictured), where we tried not to be too self-conscious with all the joggers and walkers looking frightfully fit and fulsome. Plenty of people walking dogs too; that was more our pace.

A booze shop (yes, open at 9 on a Sunday--civilization!) on the way back to the hotel ensured we were stocked for the week. The proprietor told us this was the first nice day after a week of storms like North Sea storms, which I remember from my school days.

I worked in our room, while PJ read, and then we were off to make sure I could find my way to Canterbury University for my work tomorrow. How did we ever live without GPS? We found a Japanese place for lunch, where I had my first sushi burger. What a concept! 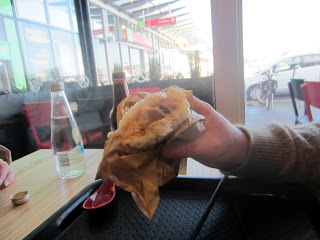 It was hard to keep the thing together, but very tasty, especially since I had pork belly in the middle. Don't tell my doctor!

We walked around the downtown area devastated by the September 2010 and February 2011 earthquakes. Two unfortunate truths strike me about our consciousness about natural disasters: We don't pay much attention to them unless they happen in the U.S. and we forget about them quickly. These quakes were terrible. People died, but the ruination of so much of a city's buildings is also sad. 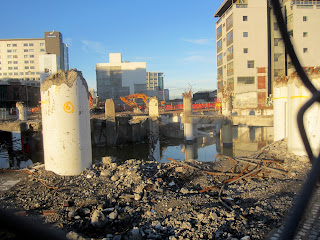 We walked to Saggio di Vino for an Italian (sort of) meal. The restaurant was very good, excellent service... oh hell, I'll post a review on TripAdvisor.


Posted by Robin McWilliam at 2:58 AM


Home visit notes aren’t something I’ve put a lot of thought into. Some states require home visitors to use a format that's too child focused. Here are some guidelines I’ve given.
Posted by Robin McWilliam at 2:08 PM